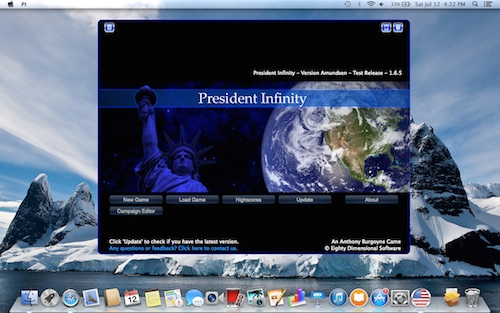 (Note: President Forever 2016 has been renamed to President Infinity.)

The second Mac version of President Infinity has been released!

This version contains a large number of changes and fixes, mostly to the user interface.

If you are a Kickstarter backer with a Mac P4E16 reward, shortly you will receive an e-mail notifying you the Test Release is available. If not, you can contact us. Alternately, you can go here.

You may get a warning when downloading or installing the game. This is because we haven’t received certification from Apple yet. We plan to do this soon, but in the meantime you might get a message such as the above.

Open the drive (if it doesn’t automatically open), and move the ‘President Infinity′ app file to your Applications folder.

(You can also move the previous President Forever 2016 file from the Applications folder to the trash.)