President Forever 2012 has been released! Play the definitive 2012 political game from the series that “will keep political wonks glued to their PC screens.” – The Philadelphia Inquirer

It’s 2012. The fate of the nation is now in your hands with the most sophisticated political game yet! President Forever 2012. 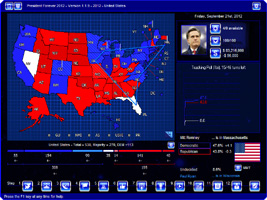 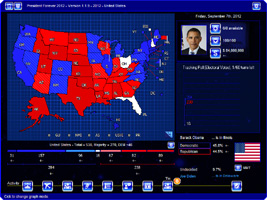 Are you ready to become the most powerful political leader in the world? Prove it in this definitive political election game.

You can order President Forever 2012 and immediately download the game here. (Note: for Windows.)

President Forever 2012 is the most in-depth, intense political election game ever made. Using realistic electorate modeling techniques, an unprecedented number of options, and detailed candidates, this is big time!

Internet connection required to download and for one-time activation.

The goal is simple: win enough Electoral College votes to win the election. You are responsible for all aspects of your candidate’s election strategy: planning and buying advertising, conducting fundraising, giving speeches, recruiting high-profile and grassroots supporters and spinning news.

Players select their party, candidate, and whether to start in the general election or the primaries. Candidates have varying levels of experience, issue familiarity and other attributes, which affect how they perform and how voters perceive them. They also have full platforms, which affect voter support and can be changed in response to events. The U.S.A. is a big country, and a successful candidate must focus limited resources. Choose which states you will target, and decide how much of your candidate’s resources to expend pursuing each one. Primaries and caucuses for each state are included as candidates from each party battle to win their nomination. Choose where to barnstorm and hold rallies, give policy speeches, and raise funds. 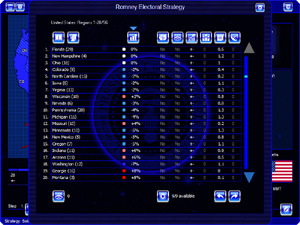 Players can recruit new foot soldiers, endorsers, and big-name surrogates. Both can help spread your campaign message and drum up popular support. Foot soldiers work in their own states and can help get out the vote, while surrogates can have specific state bonuses or crusade around the country. Special interest groups and news media can provide momentum-boosting endorsements – but gaining them may cost scarce political capital. The closer they are to your candidate on an issue, the more likely they are to provide an endorsement.

In addition to the general election, President Forever 2012 includes the option to start in the primaries, and includes all the major Republican candidates, as well as the option to run Hillary Clinton against the incumbent President in 2012. 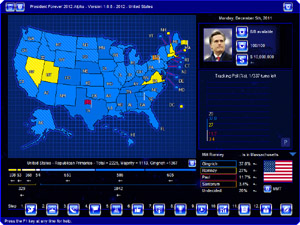 Think Hillary Clinton could do better than Barack Obama? Want to see how the primaries would turn out if Newt Gingrich weren’t in them? Curious if Chris Christie could join the Republican fray and win? Now you can experiment and see. 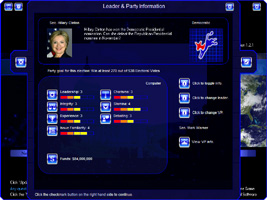 Establish and tweak your candidate’s key theme and beliefs on core issues. Your candidate can change the party’s platform, which will attract some voters while alienating others. While moving to the center can help attract voters, there is also a chance existing supporters will leave after a dramatic policy shift.

Tracking polls allow you to gauge public support and opinion on campaign issues. Positive poll numbers can help gain much-needed momentum and sway undecided voters. You can also gain insights into the electorate through polling, and use them to hone your ads or speeches.

Create ad campaigns to highlight your candidate’s campaign themes and platform. Better ads take more time and cost more money. The more they run, the more they cost. Carefully tailored advertising can build a campaign, but ineffective ads may waste valuable resources. Be careful – attack ads can tarnish opponents but can also backfire. 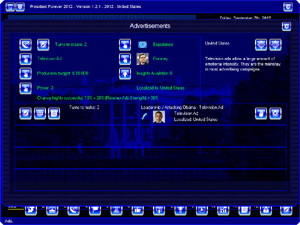 News stories can be spun to improve your candidate’s profile, for damage control and to turn the heat up on an opponent – spin from the campaign or assign surrogates instead. From time to time, candidates are offered the chance to give interviews. These may help or hurt the campaign depending on attributes such as knowledge and charisma. 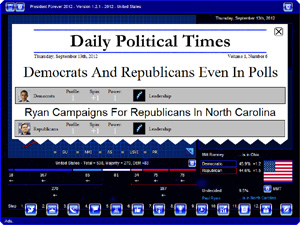 You can dig up scandals on opponents or hire spies to infiltrate an enemy’s headquarters. Be careful! This strategy can backfire if caught.

Almost everything in an election costs money. Run out, and your campaign will grind to a halt. Increasing the time spent fundraising will divert your candidate’s time from other aspects of the campaign, but will build up the campaign war chest.

Barnstorming, giving speeches and attending fundraisers deplete energy, which can only be restored by resting away from the campaign. Getting tired can lead to embarrassing gaffes.

Command points are the strategic resources available on a day-to-day basis. They are replenished each turn, but are limited – there are never enough for all possible courses of action your campaign may wish to pursue. Making a policy speech, holding a fundraiser, spinning news stories and recruiting foot soldiers and crusaders all deplete your candidate’s precious command points. You must ensure the maximum political value for each command point you expend.

Candidates have a fixed number of political points, which are used to tailor a campaign to particular political interests. These help gain endorsements, which in turn build momentum.