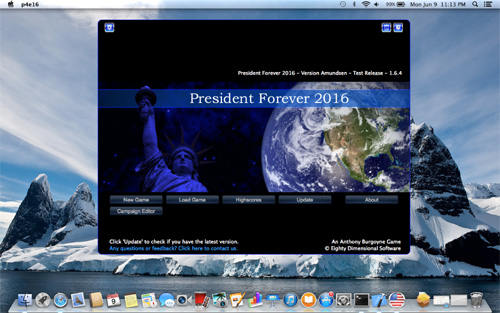 Our very first Mac for President Forever 2016 Test Release has been released!

If you are a Kickstarter backer with a Mac P4E16 reward, you should have received an e-mail notifying you the Test Release is available. If not, you can contact us. Alternately, you can go here.

You may get a warning when downloading or installing the game. This is because we are waiting for certification from Apple, which takes a couple weeks.

Open the drive (if it doesn’t automatically open), and move the ‘p4e16’ app file to your Applications folder.

Things fixed or changed for the forthcoming version:

There are bound to be some bumps and hiccups in the roll-out, I’ll do my best to remedy these as I become aware of them.