Senate 2016 has just been added to Congress Infinity, and the map below shows how things are looking right now for the 2016 Senate elections. 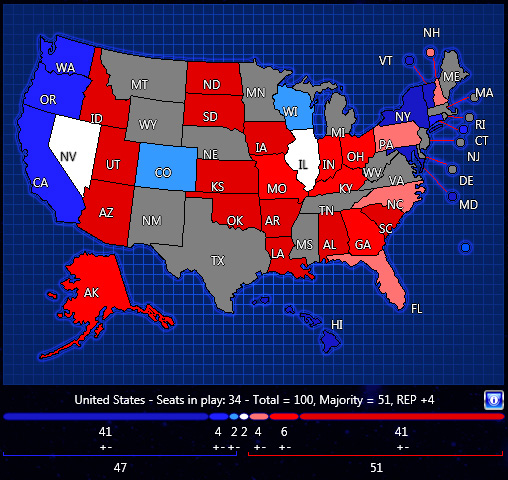 The 2016 cycle has 34 seats up for election (at this point). 24 are where the incumbent party is Republican, 10 where it’s Democratic, so almost 2.5 times as many Republican seats are up for election than Democratic. That sounds good for Dems, but a Senate victory has to come from individual seat wins – which seats could they capture to net 4 or 5 seats (depending on who wins the Presidential election)? Looking at the details and assuming there isn’t strong sentiment for one party or another, the map doesn’t look as easy as you might think given the sheer number of incumbent Republican seats up for election.

At this early stage, it looks like there are 10 seats that have a significant chance of changing hands, 7 Rep and 3 Dem.

First the possibilities for Dem pick-ups, with the candidates we’ve put in against them for now and the percentages they start with in the latest internal version of Congress Infinity.

An interesting element to this is Rand Paul’s KY seat, where Kentucky law seems not to allow his name to appear on ballots for two offices simultaneously. My guess, though, is that Paul will figure out a way to run in the Republican Presidential primaries and have his name on the Kentucky Senate ballot.

Yet, even if Dems capture 4 seats and the Presidency, they have to make sure they don’t lose any. Here are 3 seats that could be close, where the incumbent candidate is Democratic.

Reid won a relative squeaker last time, 50.3% to 44.6% against a weak candidate. Gov. Brian Sandoval has been polled beating Reid.

After incumbent Sen. Mark Udall lost his seat to Republican Rep. Cory Gardner in CO, it seems like Bennet’s seat might be a plausible Republican target.

A big question for either party is where there will be open seats – soon, Senators should start announcing whether they intend to retire after the 114th Congress, and there’s the possibility of successful primary challenges to incumbents.