I am at work on a new feature for President Infinity – the Polls Editor. This is part of the Campaign Editor. 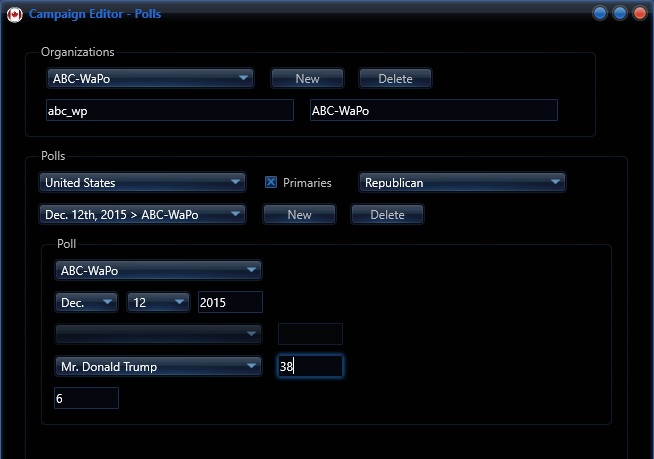 Here, I am entering info for a Dec. ABC-Washington Post poll for the Republican primaries, which has (among other things) Donald Trump at 38% and Ted Cruz at 15%.

This feature has two main aims.

1. It will allow for starting %s in a game to change based on the start date. Currently, there are only primaries or general election %s.

2. It will make it much easier for a campaign designer to figure out starting %s for a given date. Just enter the polling data you have available for around that date. The computer will fill in any of the blanks automatically, using region issue similarities to find the best fits. No more guessing what Bobby Jindal’s %s are in North Dakota.

You can see that you can enter both general election polls and primaries polls. For the general election, you can also enter generic numbers (‘Republican’, ‘Democratic’) or leader-specific %s for polls that looked at hypothetical or real match-ups (this will become more important when Favorability is implemented – that is set to be implemented next).

You can also see that there are specific organizations associated with a poll – for now, that’s just to help keep track of which poll is which. In the future, this might be expanded to allow for tendencies towards over- or under-sampling by various organizations which lead to skewed results.

Finally, there is a margin of error box for each poll (set to 6 in the above screen shot). The computer uses this when figuring out starting %s, especially when there’s a difference between polling numbers that are relatively close in time.

10 thoughts on “The Polls Editor”