The big thing with this release: finalized all the local candidates.

This involves not only adding endorsers in, but also adding Political Influence Points, which gives the game an extra dimension. That leads to …

The game has automatic minority government resolution in it right now. Basically, if you’re the Conservatives, the other 3 parties won’t cooperate with you, even if you have the most seats. So, the only way to get a workable majority as the Conservatives if you have a minority of seats is to fall 1 or 2 short, and then work with the Independents.

Once Endorsers and PIPs are added, you can decide to retain PIPs instead of using them on Endorsers, and if no one has a majority of seats, they can be used to sway parties to your side.

This will start off very simple, so people can modify the leader attributes without having to modify the XML files.

Those are the major things as it looks right now. Feel free to suggest ideas in the comments. 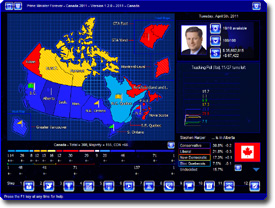 With the 3 opposition parties voting to defeat the government, Harper goes to the polls. Can he get a majority government? Or will the Liberals stop him, and lead with a coalition government of their own?

We’ll be adding features and updating the game through to the election.

What to expect: an initial release this week. Then, we’ll update the game, adding features and content as the election progresses, probably right up until the election.

– Detailed party seat breakdown according to strength of support.

– Minority government resolution: will the NDP and Bloc work with a Conservative minority? if not, the Governor-General will award the government to the Liberals.

– Turn parties off: want to see what the election would be like without the Greens, for example (or any other party)? Turn them off, and give the scenario a spin.

– Local scandals: dig up dirt on not just your opponent’s national campaign, but on local candidates as well … and then fan the flames into nation-wide scandal coverage.

– Seat swing info: look at how many seats you’re projected to take compared with the last sitting of Parliament, and which incumbents you’re going to dethrone.

– New ads system: target ads to the national, regional, or local levels, and run them accordingly.

– Issue positions expanded from 5 to 7: be the ideologue you always wanted to be.

Here is the first screenshot from Prime Minister Forever – Canada 2011: 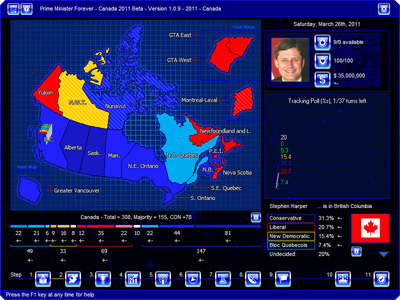 Here, the numbers used are from the 2008 election results, with a universal shift based on a recent poll, giving the Conservatives 147 seats, plus another 6 where they are tied, for a theoretical total of 153 seats – 2 short of majority.

If you pre-ordered (including under the ’2010′ name), you can get the latest Beta here:

President Forever 2008 + Primaries is reviewed in the latest edition of the Minnesota Republic, by J.D. Hunt.

“the incredibly addicting game is without a doubt, the best election simulator on the market.”

Hunt also gives a few suggestions, in particular allowing players to continue in an observer mode even if they have lost in the primaries, to see how things play out – noted.

If you pre-ordered (including under the ’2010′ name), you can get the latest Beta here:

If you pre-ordered (including under the ‘2010’ name), you can get the latest Beta here:

How does one figure out a potential Republican party nominee’s intentions?

Consider John Thune’s recent CPAC speech. CPAC is a major Republican conference, where potential candidates can get a significant amount of media and insider attention. If one is going to make a speech and is seriously considering running for President, one wants to make a good impression, no? Yet, John Thune gave his speech while making heavy reference to his notes, and his gestures made it look like he hadn’t practiced it that much. After watching, I was left considering two possibilities: 1. He isn’t that good at delivering speeches, or 2. He didn’t think it worth his time to prepare it to a level which would be polished (which at that length would probably take hours). I compared this to Mitch Daniels’ speech, which was delivered at a much higher level.

Shortly after, Thune has announced his isn’t running for President (which I first read through Matthew Newman’s post).

Similarly, consider Chris Christie’s recent AEI speech. Many pundits said it was well-delivered and he didn’t refer to notes. I watched it, and was struck by how poorly it was delivered compared to most speeches Christie gives. He was frequently referencing his notes, and some lines he seemed to stumble over. My conclusion is: Christie is being sincere when he says he doesn’t intend to run for President in 2012. If he were intending to do so, he would have practiced the speech much more.

The basic point is: for politicians who are time-pressed, looking at whether they think it worthwhile to spend several hours rehearsing what would be an important speech (or similar sorts of things) can be an indicator of their intentions.