President Forever 2016 has been rebuilt from the ground up, to allow for a huge number of improvements in the game, and to open up future development as we head towards 2016.

2016 campaign that is constantly being updated

The 2016 campaign currently includes 34 candidates and 4 parties, and is continually being expanded and updated as 2016 gets closer. 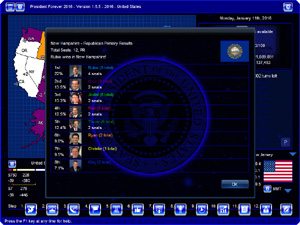 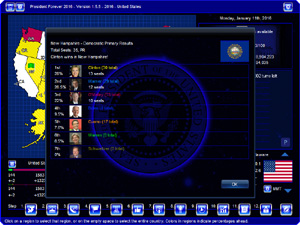 Candidates now have a host of new attributes, covering all major aspects of a campaign, from Spin Strength to Ad Strength to Strategic Strength and more. Not only do candidates start with different strengths, you can work to increase the attributes. 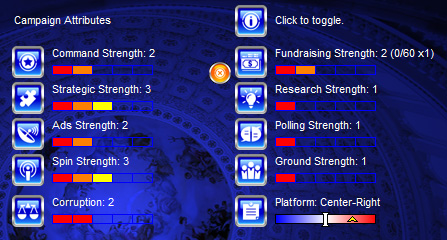 Want to boost your candidate’s fundraiser hauls? Upgrade your Fundraising Strength. Want to more easily find Insights into the electorate? Increase your Research Strength. Want rapid response to news stories? Time to up your Spin Strength.

Vice-Presidential candidates now give Policy Speeches, increase their Issue Knowledge, and Fundraise, and more beyond their 2008 abilities.

The GUI has been revamped and simplified. Some highlights: new Strategy Screen, new Endorsers Screen, new Primaries Results Screen, and much more. 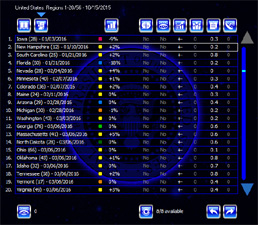 In the new Strategy Screen, you can order the primaries by date, who’s in the lead, advertising power, and more. Then click-through for detailed stats on that state.

A universe of Endorsers

The number of Endorsers has increased (including all Senators, Governors, and more). Endorsers can now become Surrogates once you lock up their endorsement! 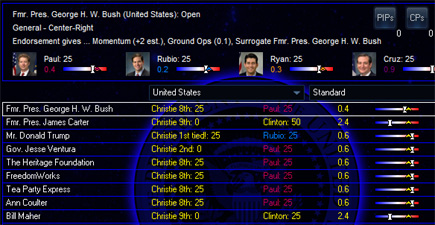 You can now invest resources to build local campaign infrastructure, which synergizes  with your foot soldiers!

You can now choose who to focus on for a given debate, and debate scores are resolved differently. Can you neutralize your opponents’ attacks? Will they backfire? Will you be able to land a devastating attack on your opponent? 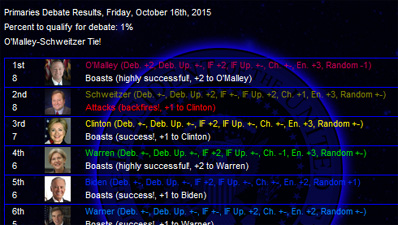 The Campaign Editor is included in President Forever 2016. It includes full ability to modify candidates, leaders, surrogates, endorsers. It is continually being enhanced as we move towards 2016. This is the tool 270soft uses to modify campaigns. 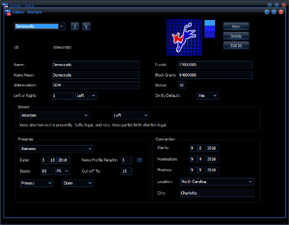 President Forever 2016 will continue to be expanded on a regular basis until the 2016 election. All owners receive updates for free.